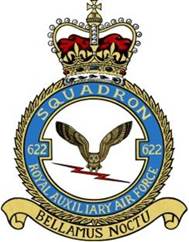 THE ASSOCIATION
The Company and 622 Squadron RAF have entered a Memorandum of Understanding dated 18th February 2018 with the aim of the Association:
(i) to promote and contribute to the standing and interests of the Company and the Squadron for the time being by all appropriate means; and
(ii) to provide such mutual assistance and support for the Company and the Squadron as may be desirable and practicable.
The individuals involved in the day to day running of the association are:
Officer Commanding 622 Sqn RAF: Sqn Ldr Dorian James
Liaison Officer 622 Sqn RAF: Sqn Ldr Shelley Mackinnon
WCA Liaison Officer: Court Assistant David Millington

You can read about the recipient of the Blondie Swales Award 2022 here.

HISTORY OF 622 SQUADRON RAF
World War II
No. 622 Squadron was first formed at RAF Mildenhall in Suffolk on 10 August 1943, equipped with Stirling Mk. III bombers, as part of 3 Group in Bomber Command. It re-equipped with Lancaster Mk. III bombers in December, after briefly operating Lancaster Mk. Is that month. It operated in Bomber Command’s Main Force as part of No 3 Group until April 1945 when it moved to humanitarian duties, dropping food to the Dutch (Operation Manna), repatriating POWs (Operation Exodus) and ferrying troops home from Italy. The Squadron was disbanded at Mildenhall on 15 August 1945.
1950 to 1953
Unlike many of its contemporaries 622 Squadron was reformed post-war as a Royal Auxiliary Air Force transport squadron at RAF Blackbushe on 15 December 1950. It operated Valettas and consisted of a nucleus of regular pilots and Radio Officers drawn from local firm Airwork Ltd. This proved to be a success, and the squadron operated in the Suez conflict. The squadron disbanded again on 30 September 1953 due to costing. The C/O was the famous Wing Commander Bob McIntosh (“All-Weather Mac”) who had been the Chief Pilot of Airwork Ltd. The crews had two weeks a year extra training at RAF Dishforth where two of its Radio Officers, P/O Abrahams and P/O Jellett, achieved the rare RAF VIP standard.
Current role
Originally formed as 1359 Flight RAF, it was attached to a Hercules OCU (Operational Conversion Unit), based at RAF Lyneham in Wiltshire in 1994 for a 3-year trial period. After the success of the trial, its role expanded over the years to provide aircrews to all air transport and air-to-air refuelling aircraft of the RAF. It moved to RAF Brize Norton in 2011. On 1 October 2012, in recognition of its continued work with the main squadrons, the flight was authorised by the Standing Committee of the Royal Air Force to be rebadged as 622 (Reserve Aircrew) Squadron.

RECENT ACTIVITY OF THE ASSOCIATION
1. At the Court Meeting held on the 26 October 2021, Wing Commander Dorian James was admitted as an Honorary Freeman to the Company.
2. The 2022 WCA Award to 622 Squadron (known as the Blondie Swales award after one of the Squadrons previous commanding officers) was presented to Squadron Leader O’Brien at the Company Livery dinner on 26th October 2022.
3. Court Assistant David Millington has agreed to join the RAF liaison team for the Company as from July 2021.
4. The Company had a thoroughly enjoyable visit to RAF Brize Norton, where 622 squadron is based, in August 2022. Company members were able to hone their flying skills in both a Hercules and an ATLAS flying simulator.