HMS Mersey is a River Class Offshore Patrol Vessel, one of four owned by the Royal Navy. She was launched in 2003, and is the youngest of the River Class built for the Fishery Protection Squadron. She and her sister Ships, HMS Severn, HMS Tyne, patrol the waters of the UK and up to 200 miles off shore working with the Maritime Management Organisation, ensuring that fishing boats and trawlers adhere to UK and EU fishery regulations and quotas. Her adapted sister Ship HMS Clyde (which includes an added flight deck) is permanently deployed as the Falkland Islands Patrol Vessel, monitoring the local waters and airspace whilst conducting routine visits and providing reassurance to the many small settlements found throughout the Islands.

HMS Mersey is a highly maneuverable and versatile vessel. She can turn rapidly and come to a complete stop at sea within 276 yards (or 43 seconds) when travelling at 21 knots, extremely useful when working in inshore waters and in close proximity to fishing vessels.

Based in Portsmouth, HMS Mersey is a regular visitor to UK ports and often invites groups on board to demonstrate the capabilities of the Royal Navy as well as give a taste of daily life on board. She operates a crew rotation system which means that a member of the Ship’s company would normally spend four weeks onboard and two weeks at home or on courses, allowing the Ship herself to be on almost constant patrol.

The Company has been associated with HMS Mersey since 2008. In Spring 2009 the then Master and Commanding Officer signed a memorandum of understanding which confirms that the aims of the association include the promotion of the well-being and interest of the Ship and to provide such assistance and support ‘as might be desirable and practicable’. Each Commanding Officer is elected as an Honorary Freeman of the Company for the duration of their service in MERSEY and the CO each year nominates a member of the crew to receive the ‘Sailor of the Year Award’.

The Master accompanied by members of the Company visited our affiliate Royal Navy Ship, HMS Mersey, on Friday 25 March 2022 at Portsmouth Royal Naval Base.

The Ship was alongside for a couple of days. It is usually at sea for over 300 days a year which makes it one of the most active ships in the Navy.

We were soon on deck to learn about firefighting on a Royal Navy ship. The onshore maxim of running away from a fire cannot apply at sea where the order of the day is to advance to the fire. Necessarily, specialist clothing is worn, and the photograph shows the men making a quick change into the two types of firefighting kit. It was an impressive display of the ability of the men and the equipment at their disposal to keep the Ship safe from fire and damage.

There followed a trip to  the engine room where we were instructed in the capacity of the engines and how the ship managed to make best use of its fuel. The necessity of having engineers that can do running repairs when at sea was brought home to us.

We then visited the Bridge and were invited to sit in the Captain’s chair whilst the Officers explained the capabilities of the Ship in executing the Ship’s brief whilst at sea.

A great visit was rounded off by some fine hospitality from the Officers in the wardrooms at luncheon.

You can read about our Sailor of the Year 2022 here.

You can also read more about HMS Mersey on the Royal Navy’s website here. 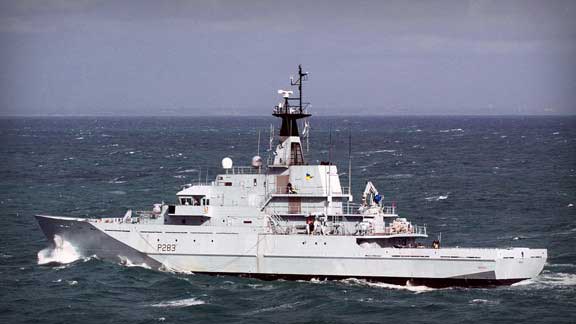