There is evidence that arbitration and mediation were in use in early China, Ancient Greece and the Roman Empire. Historians believe the Phoenicians used mediation to resolve trading disputes.

During the Middle Ages the Papacy fulfilled the role of arbitrator in disputes between the various kingdoms and nations across Europe. In England and elsewhere arbitration was in regular use to decide commercial disputes and the Masters of the early guilds, the forerunners of today’s livery companies, often acted as arbitrators in disputes between guild members and between those members and their customers.

The development of modern international arbitration is often traced from the Jay Treaty of 1794 between the United Kingdom and the newly independent United States of America. This established three arbitral commissions to settle claims arising out of the American Revolution. In 1871 under the Treaty of Washington, arbitration was used to settle claims relating to British neutrality during the American Civil War.

In April 1883 a committee was established by the Court of Common Council of the City of London to prepare proposals for establishing a tribunal for the arbitration of domestic and ‘trans-national’ commercial disputes within the compass of the City. The plans were delayed pending the passing of the Arbitration Act of 1889 and it was not until 1892 that the City of London Chamber of Arbitration was inaugurated, with the support of the London Chamber of Commerce. In 1981 the London Court of Arbitration, as it had become known, changed its name to the London Court of International Arbitration. Today the LCIA is one of many organisations in London that offer not just arbitration and mediation but other forms of dispute resolution including adjudication and expert determination.

The Worshipful Company of Arbitrators was created by the grant of Letters Patent at a meeting of the Court of Mayor and Aldermen of the City of London at Guildhall on 17th March 1981. It thus became the ninety-third in the list of Livery Companies of the City of London. 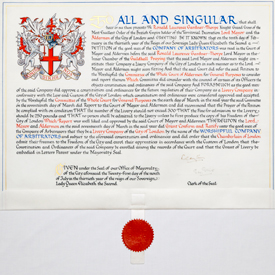 The Letters Patent creating the Company 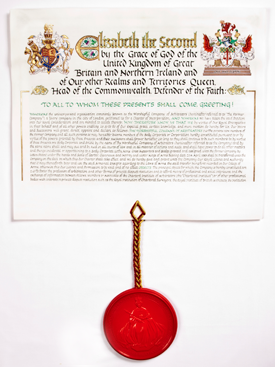 Thirty years later, on 17th March 2011, the Company was notified that Her Majesty The Queen had approved the grant of a Royal Charter to the Company at a Privy Council meeting held the previous day.

The Royal Charter creating the Company as ‘one Body corporate and Politic’ was sealed on 24th April 2012.

The Company was granted a Coat of Arms (more formally ‘Armorial Bearings’) by Letters Patent from the College of Arms dated 20th April 1983. For a description of the Company’s coat of arms, please see this explanation