Participation and progression: how to get the most out of your membership

Freedom of the City of London and the Livery

The words “Freeman” and “Liveryman” are gender-neutral. We have many women among our members.

Becoming a Freeman of the City of London is a necessary first step to becoming a Liveryman. By the early 14th Century, “Freedom” of the City was limited to members of the guilds. It could be acquired by patrimony (inheritance,) or by servitude (apprenticeship) or redemption (payment). The Worshipful Company of Arbitrators offers freedom by redemption, the most common route among livery companies nowadays.

Once the Company has accepted a new member (a Freeman of the Company), we support their application to the Chamberlain’s Court for Freedom of the City of London. The application is presented to the Court of Common Council for approval, after which the applicant can attend a Freedom Ceremony at Guildhall. Family and friends are welcome to attend. The applicant reads the Declaration of a Freeman and signs the Freeman’s Declaration Book. They are then presented with an inscribed parchment known as “The Copy of the Freedom”, along with “Rules for the Conduct of Life”, and welcomed as a Citizen of London. 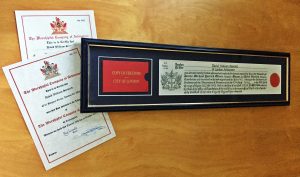 Murray D. Craig has a modern take on the traditional privileges of Freemen in a paper entitled “Sheep Across London Bridge” here.

Progressing to the Livery

As a Liveryman, you can take part in the management and organisation of the Company. We encourage all our Freeman to “take the Livery”. This entails a short ceremony at a meeting of our Court, at which the applicant makes the Liveryman’s Declaration and receives a medal.

There are several benefits of progressing in this way. A Liveryman is eligible to vote at the Guildhall for the election of the Sheriffs and Lord Mayor. They can attend the Company’s Common Hall, and may vote (if they were admitted to the Livery on or before the previous 31st October). They are eligible to join one or more of the Company’s committees and the Court, and to be elected as an Officer of the Company. More details can be found here:

Our committees are vital to the running of the Company: not only are they are a key to proper governance, but they organise and oversee our core activities. Each reports through its chair to the quarterly meetings of the Court. As the committees deal with matters on which Liverymen (but not Freemen) can vote, membership is open to all our Liverymen.

By way of illustration, here are outlines of the activities of our four main committees.

There are also opportunities for Liverymen to become trustees of the Company’s Charity.

Our Charity is constituted independently of the Company by a Trust Deed approved by the Charity Commission.  There are not less than four or more than eight Trustees who administer the Charity aligned to the objectives of the Company as set out in its Charter.  The Trustees comprise the Master, Senior Warden, two Court appointees and four Trustee co-opted appointees who are usually drawn from the membership of the Company.

The Officers of the Company

Our Officers are the Master, Senior Warden and Junior Warden. Their election takes place every April at Common Hall, from nominations of the Court. The Officers take up their posts at the Installation Ceremony in October each year.

The Master (another gender-neutral title) is the most senior Officer in the Company, responsible for its governance. The Master chairs Court meetings and takes the lead in ceremonial occasions. Masters have a role also in supporting the Lord Mayor, Sheriffs and Alderman of the City, and the Corporation of London.

The Master has a tenure of one year from the date of Installation, and then becomes a Past Master.

The Junior Warden usually becomes the Senior Warden as they progress towards the position of Master. The Wardens support the Master, deputising for the Master where necessary at meetings and ceremonial functions, and monitoring the direction of travel of the Company, by reference to its objectives and strategic plan.

The Court of Assistants supports the Officers in the governance of the Company. It comprises the Officers themselves, between ten and twenty-four Court Assistants, and Past Masters (Voting or Non-Voting). The agenda and minutes for the quarterly Court meetings are prepared and distributed by the Clerk.

Our Almoner is either a Past Master or a Court Assistant. Their role is to seek to maintain contact with members of the Company in need of welfare support, and to report to the Court when appropriate, so that the Court may take such action as may be necessary.

Opportunities for all members

All members of the Company, Freemen and Liverymen, are welcome to participate in our activities, and are encouraged to do so. As well as social and formal occasions, there is a wide range of opportunities, from collaborating with students on our mediation and arbitration skills competitions, to volunteering in schools through Livery Schools Link or through our association with Team Up.  We value greatly the skills which our members bring and the time which they devote to such core activities.